There have been NO CUTS to K-12 Education in Kansas in recent years. Every taxpayer in Kansas should see this video.

Rep. Owen Donohoe delivers proof that there have been NO CUTS to K-12 education spending in Kansas in this video clip from a candidate forum with his primary opponent, Kristy Acree. Watch how Owen provides proof of the $1,000 per-student increase in spending in recent years. 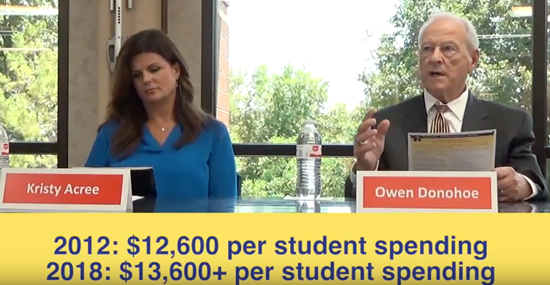 The liberals and 'moderates' in the Kansas legislature erroneously claim there are school funding reductions...but there simply aren't any.

K-12 school funding has increased 88% in the last 20 years, and now takes 65% of the entire state budget. The Kansas Supreme Court makes matters worse with incessant mandates for more funding. Kansas taxpayers - who are represented by legislators - have lost their voice. 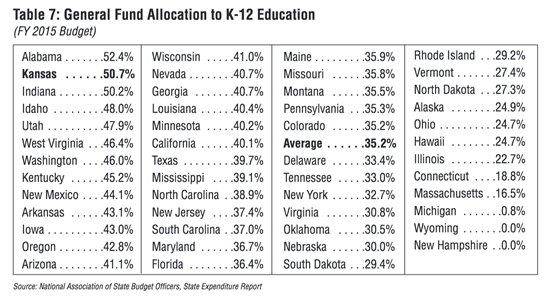 Kansas already ranks #2 in the U.S. for spending the most of its state budget on education. (See chart above.)

Kansas spends a higher percentage of its state budget on K-12 education than almost any other state in the nation.

And this is only the state portion of education funding. We're spending more than $13,400 per pupil with all sources of funding included. And if you include higher education in Kansas, 65% of the state budget goes to education.

We must stop the madness of the courts dictating education spending.

Kansas taxpayers are fed up with the court dictating spending. It's the legislature's job to allocate the budget, so the state can live within its means.

In fact, 6 out of 10 Kansas voters want to amend the state Constitution to prevent the court from dictating school spending. See the facts.

Voters know that the $1 BILLION more that the courts want to spend on education isn't doable. We simply don't have the revenues (even after the largest state and local tax increases in history!). Your legislators haven't been strong enough to stand up to the courts -- but I will be.

This month, the state of Kansas is distributing $5 million in additional funds to schools to secure buildings and campuses. K-12 public school districts have applied for grants from the state and received them -- now they can install added security like metal detectors, secure windows and doors, and security cameras. The DeSoto school district was among those receiving significant funds.

I have championed school safety and security as a priority -- but we don't need to raise taxes to accomplish it. The funds have already been distributed, and an additional $2 BILLION in surplus funds is available at the KS Dept. of Education. That money should be used to protect schools and educate students in the classroom (not administrators or bureaucracy) - so student performance outcomes improve for future workforce needs.  Learn more here.

Let me know your thoughts. Send an email letting me know you've had enough of these court spending mandates. Or if you support them, let me know exactly how you'd pay for them without raising taxes.